Trump v Biden- For better or worse, the market should be prepared

This piece is updated on October 30th

The general election is within a week. National polls and betting odds favor Biden/Harris, but the pair’s lead in Florida and Pennsylvania are within margin of sampling error, so it’s still likely for Trump to win the way he did four years ago. Senate and representative elections are taking place on the same election day, November 3rd. As the date approaches, we are preparing for one of the many scenarios that we think the most possible: a blue wave.

The chance for a delayed election result is no higher than 10%. It’s even more unlikely for the two parties to tie. Trump, if re-elected, will make his current policy last, but if Biden gets elected, the economy will go through major changes to cohere to the Democrat’s campaign promises.

First, the pre-election volatilities in the market

After a series of flabbergasting events in October including Trump’s positive test for COVID-19, very brief hospitalization, tweets over putting off stimulus negotiations, and Hunter Biden’s scandals, Biden maintains his lead— however marginal— in two key swing states, Florida and Pennsylvania, each supplying 29 and 20 electoral votes. Polls by RealClearPolitics by October 28th show that Trump is closing the gap, and the market should not rule out the possibility that Trump could catch up.

What if election results are delayed?

This year, the number of early votes is reaching historic high. 70 million of Americans have already voted this year with the election still one week away, almost 1.5 times more than the total number of early voters in 2016. The overwhelming amount of mail-ins and early votes might take longer to process and the final result could come days later. If there’s anything controversial that could happen like Trump repeatedly claimed, the result of the election will be determined by the supreme court.

In 2000, the supreme court has ruled Bush won Presidency. The race between Bush and Gore in Florida that year has ended up with Bush winning by only 2000 votes. That automatically initiated a recount of votes and after nearly 6 weeks of recounting, the supreme court stopped the recount and ruled that Bush has won the election. S&P 500 slid by 12% from election day to the lowest point on December 20th, 2000. 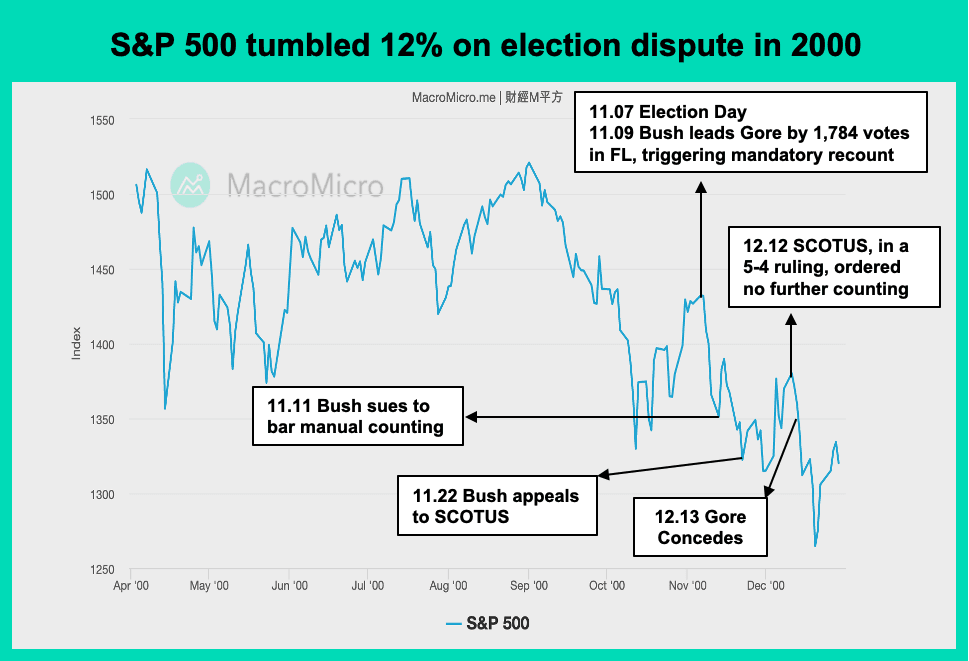 Another scenario for a delayed result, although almost impossible, will be that neither candidate receive more than 270 college votes. In that case, Congress will hold contingent election and let the newly elected Representatives of 50 states vote for President. (Republicans right now hold 26 states.)

How will a Blue wave change the game?

Although Biden has said he will reverse Trump’s tax reductions on his first day in office, the prospect of the economy might not allow it, and besides, the Democrats need a majority in both Senate and the House to do so.

America’s economic outlook will remain unclear until an optimal, credible, safe vaccine will have been mass manufactured. Until then, the pandemic and its damage effect can't be overlooked. Restoring taxation at this moment will deter businesses and high-income families from investing, hiring and spending. Current Fed chairman Jerome Powell’s term is up in February 2022. The President will need to renominate Powell or nominate a new chair. It’s likely for Powell to stay in position to ensure the monetary policy could maintain. During the Financial crisis in 2009, Obama renewed Republican Ben Bernanke’s second term as Fed chair in order to maintain policy consistency.

Richard Clarida as Fed’s Vice chairman is also likely to renew his term in early 2022. As for the Minister of Treasury, current Fed official Lael Brainard and left-wing Senate Elizabeth Warren are reported to be Biden's top choices.

Trump as a businessman is often labelled as the "Washington outsider". Biden, on the contrary, is undoubtedly the Washington insider. As a sophisticated diplomat, Biden likes to seek consensus and reach agreement. He has a group of more than 2,000 foreign policy advisers, including former deputy secretary of state Antony Blinken, former national security adviser Jake Sullivan, former US ambassador to the UN Susan Rice, former assistant secretary of state Kurt Campbell, and the executive VP of CNAS Ely Ratner.

Blinken is at the top of Biden’s shortlist for secretary of state.

Foreign policy has been the biggest missing part of Biden's campagin, but from Blinken and others' public speeches, Biden’s foreign policies take shape. They acknowledge the economic threats China poses, but rathe than starting a “new cold war”, the Democrats believe the new administration needs to deal with each of the China issues with distinctive approaches. Tariffs could be negotiation tools but it’s unrealistic to completely cut ties with China. They said they will continue banning Huawei and its 5G internet, and meantime cooperate with Europe and the Five eyes to crowd out invasive Chinese enterprises.

Blinken has also said he sees how the US has dealt with the relationship between China and Taiwan as a “success” and he hopes to “get the stability back”.

For the medium and the long term, although we think Biden’s administration will focus on reducing tariffs on and trade frictions with China, Europe, Japan and India, concerns over Huawei’s security persist and we expect no less pressure over the company’s supply chain including 5G internet, base station, IC design, etc.

Since 2012, nearly 90% of the senators are aligned with the state’s preference for President. In the end, the president needs to win a majority in both Senate and the House to ensure his policies could be pushed forward. Democrats have won the House in 2018, and it’s generally believed that the Dems will win the House again and even win more seats this year.

Senate, on the other hand, has the power to vote for laws, to approve or disapprove cabinet nominations and to vote for impeachment for the President. It’s usually difficult for a divided government to implement reforms such as Obamacare and Trump’s tax reform. The president's party will need to win the Senate to pass new laws without being boycotted by the opposing party. In conclusion, the possibility of a Blue wave is slightly higher than Trump’s re-election. As America’s political scene has gradually advancing towards polarization, the President and Congress are most likely to align. Looking back in 2016, Hilary Clinton’s email controversy was revealed 10 days before election day, and the election result was jaw-dropping. This year, any guessing is almost futile but with all the possible outcomes lying on the table, we get to prepare the market and investors for the best or for the worst.

If Trump stays, he will keep the punitive measures against China in effect. If Biden wins, stocks could correct ahead of his tax hikes. The big techs, the finance sector, fossil fuel companies, and large pharmas and biotechs will also face tighter regulations. But hopes for a bigger fiscal stimulus package from the Democrats are high, and that could enable the economy to pick up its recovery pace.